For this Louisiana girl who has never been much of anywhere (at least in my opinion), it was way cool to wake up in Mexico! So as soon as we got up, we headed to breakfast. Of course we weren't missing breakfast, no way. By the way, that morning I had pancakes with blueberries, bacon, hash browns, orange and grapefruit wedges, and coffee. Hey, I needed the energy for the day ahead! After breakfast we went onto the deck and took in the view. 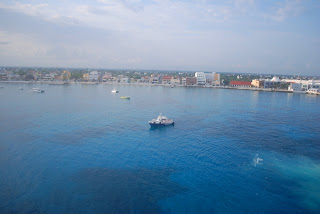 The water was awesome. The shades of blue were like crystal. We were excited to be getting off the ship and getting to a BEACH! Several of us chose the Beach Excursion. We hopped on a bus which took us to a beach. Linda told me lunch was included in the price of this excursion. I was not expecting a Buffet though. I dont know what I really was expecting. Sack lunch maybe. lol Anyway we had plenty to eat and several things to do. There were Kayaks. That's Warren, Nathan, and Beaux in that one. 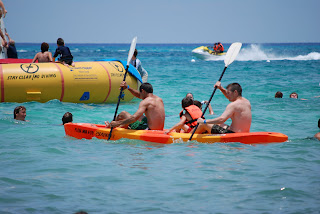 There was this trampoline floating on the beautiful water. 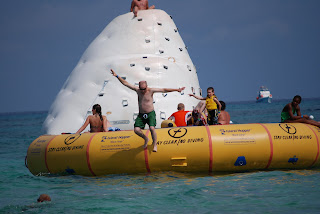 There was also a "Rock Climbing Wall" which they called an Iceberg. 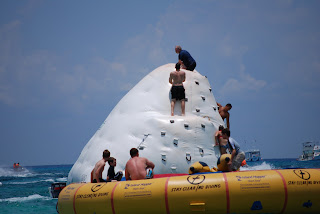 It too was floating. It looked easy enough. But when I say it was tough, I mean dang near impossible. But I did conquer it. My legs got a little shaky at one point-muscle spasms I guess. I certainly stretched my legs further than anyone should in a bathing suit, but victory was SWEET. You know, after I caught my breath. lol

We enjoyed the sunshine, saw a parrot 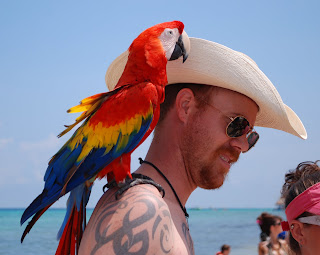 and an Iguana (I guess that's what this is). 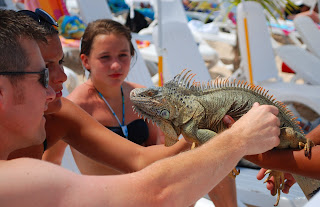 We goofed around a little and just had fun. 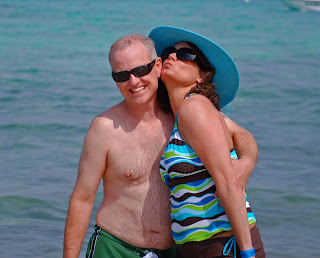 Then just before time to go I asked Todd if he wanted to go out on the catamaran. He didnt want to. I guess he was so glad that he hadnt gotten sea sick yet, he didnt want to push it. lol But Pattie heard me ask him and she said she would go. We then talked Beth and Linda into going with us and boy was I glad we went. 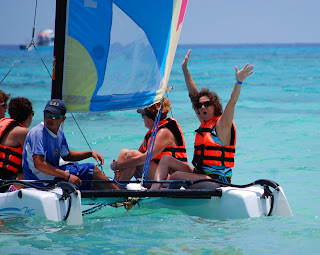 The water there on the beach was beautiful but once we got out into the deeper water it was unbelievable! 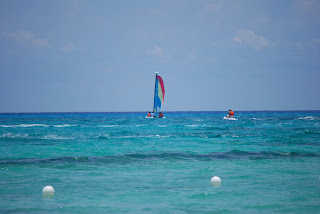 I LOVED it. I was sooooooooo glad we did that before we left. Well we did a little shopping there in Cancun and then back to the ship. The day went by pretty fast but the good news was, we still had a whole evening of fun on the ship left to do that night. I am so glad Joe called Todd and invited us, and I am so glad he said yes even though I was unsure. I am thankful to God that He blessed us with this trip. I hope we get to go again sometime. For now I will have these pictures to look back on and remember.
Posted by Cristi on Thursday, June 03, 2010

I am so glad that you were able to do this too. More wonderful memories for your future!

The water at Cozumel was lovely. The pictures I got with my regular camera even turned out beautiful. :) So glad you and Todd had a good time. AND...
Happy 27th Anniversary today. Is it really possible we're old enough to be married that long?!! Oh well, at least one of us still looks good in a bathing suit. (Hint-- it's not me.) lol

Cozumel is my favorite. place. in. the world! Jonathan and I actually looked at some of the real estate when we were there on our honeymoon. I'm SO gonna retire there! :) Glad you enjoyed it!

Randy and I took this exact same beach excursion we went. I almost wished we had a group of friends w/us like yall did. I know that made it even more fun. We went it was like the last day of Jan or 1st of Feb. As warm as it was there, the water was still a bit cool to really enjoy it.

Again love your photos and love your ability to tell your story with them so eloquently. You are so good at that...me...not so much!