The other day I took Josh to the doctor because of some stomach issues he has been having that I was thinking needed to be checked on.
So after the initial visit with the doctor, blood work was needed.
We went in early Wednesday for that purpose.
He is a big boy now, so he went back on his own.
When he was all finished he came back out into the waiting room and closed the door behind him. He immediately said "I dont feel good." I asked him if he was going to throw up. He shook his head, I knocked on the door to get the nurse to come back out and sat him down. He said it again, "I dont feel good." and then proceeded to dive over into the chair next to him. I jumped over to him and raised him up to an upright sitting position. He was OUT COLD. NADA -- NOTHING! I had to hold his head straight because it was falling, he made horrible noises like choking, or gutteral sounds. Let me tell you that was pretty dad gum scary. About that time the nurses got there and we moved him to the floor. STILL COMPLETELY OUT COLD - COMPLETELY! When we got him to the floor he made some moaning noises and jerked around a little - AGAIN, pretty scary. Still out cold.
Lets just say everyone in that waiting room now knows what I do when trouble comes. I laid hands on him and prayed out loud for him right there in front of about 15 or more people. I cant really remember what I prayed except for God to bring healing. I know it was more though. Then finally his eyes popped open and he said "What?" lol
I told him everything was okay just to lay still. He looked real confused and just looked around. The doctor listened to his heart, talked to him a second. We got him into a wheel chair then and brought him back. They checked his blood pressure and it was REALLY low, like 57/48 or something like that. AGAIN pretty scary.
After a Dr Pepper, and a cinnamon roll, he felt better.
So it seems that Josh takes after his dad in that department.
We wont be doing any blood draws any time again soon. ONLY WHEN ABSOLUTELY NECESSARY!

After it was all over and I could collect my thoughts, I remembered back a bit to a simpler time when he felt bad and I could just pick him up in my lap, hug him, move back all that blonde hair off his forehead and kiss him, and just hold on to him for a while making things better. 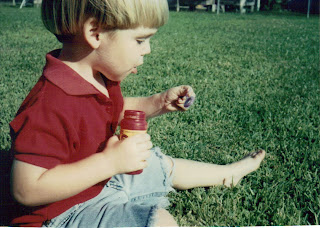 I was reminded too (by a friend) of a time when he was about three years old and was sick with an ear infection and we made a visit to the doctor. We were in the waiting room and people were going back as they were called, while we were reading a book, he in my lap. Then after one more person went back, Josh said, "Mama, when all these people get done going back to see Dr. Polk and he prays for them, then I am going back for him to pray for me?" :)
It was his first visit to a doctor besides well visits. His only experience with sickness had been that when he felt bad or was sick we prayed for him. Guess he figured we needed bigger prayers for this earache! hehehe

I love those memories.

Times sure are different now. 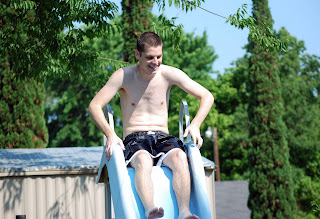 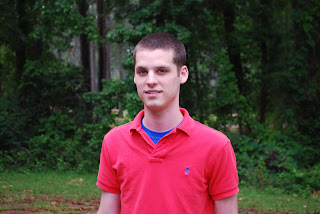 Thankfully the blood work all came back fine. So far no more issues with the stomach. Praying God answered my bring healing prayer. :)

I'm glad he's doing better and really thankful that his tests were good. :) Maybe you need to start saying those healing prayers for everyone. :)

What a wonderful example you were to those in that waiting room. God always honors our faith! Love you. mama