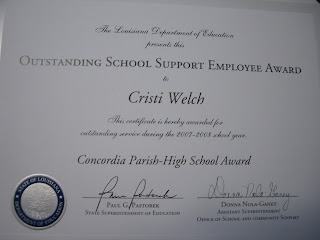 This week I was honored to receive an award! I was awarded as Louisiana's Support Personnel Person of the Year. In other words "Secretary of the Year" Cool! I was so surprised. This is how I found out. Todd had come up to the school to pick up something he needed. A few minutes before Todd got to the school, one of Joshua's teachers had been in Mr. Browns office. This particular teacher had called Josh to his room the day before in reference to something that had happened or been said in his room that concerned Josh in some way. (I never really did get that whole story). Anyway, after Todd got there Mr. Brown called my desk and in a serious tone asked me to come into his office ASAP. So thinking Josh may be in some trouble, I told Todd to hang around just in case thats what it was about. So I went in and that teacher was no longer in there, but Jana was. (our Assistant Principal). So I took a seat a little nervously, and that is when Mr. Brown told me I won this great award! I was so surprised. I asked how I got it. Mr. Brown pointed to Ms. Jana, as Ms. Jana pointed to Mr. Brown. Apparently He asked her to write something about me as a nomination for it. I won! Way cool. I was excited. I walked out to let Todd, who was waiting patiently, know that it wasn't bad news, it was good news! So on Thursday night we had to attend the School Board meeting to receive my "recognition". I worked till almost 4:00 on Thursday and went home. Upon arriving at my drive way, I noticed a red car parked. I wondered who was at our house. Then I saw Casey and Avery standing outside waiting on me! I was so excited (again). Mr. Brown had worked it all out so that they would be able to be at the meeting. It was very nice. Even Josh went! I received a pretty certificate hand signed by the State Superintendent of Education. Also Ms. Jana presented me with a very generous cash gift from the faculty and staff. After the meeting we went to Pearl Street Pasta for supper. It was delicious and Avery did great. What a nice day! That's not all. Mr. Brown gave me Friday off, to spend with Avery and her mommy and daddy. We did a little shopping but mostly just enjoyed playing with Avery. I have attached a video of some of her babblings! So sweet! What a different and special time. Hope your week was wonderful too.


Avery enjoyed seeing us too as you can tell from that great smile! 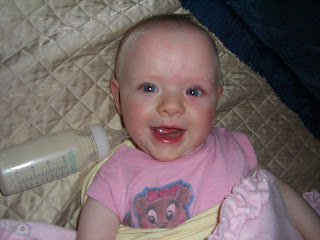 I was getting on your blog to comment about the garage sale and WOW! Cari told me about it earlier today. I told her I wasn't surprized. You are a superb person and our children are lucky to have you! CONGRATULATIONS! YOU DESERVE IT!

Now to the other business. Would like a pretty dress for $5.00? Did you get to see the link later? I am sure that person who asked me to sell for $5.00 is just snickering now. I still have it. After Ebay and Garage Sale! Oh Well...I still sold about $200 on ebay and more at garage sale too...I am sure it doesn't compare to what I have spent...but I guess it time go shopping! Nah...I really must stop so much shopping.