Off to the Races!

Well we had a different kind of few days around here.

It all started way back in November. That's when the man of the house had a birthday. The kids decided they wanted to get their dad something he would really LOVE for his birthday. So Casey did some calling around and got some prices... She found out, that if this was to be done, she was going to need a couple more folks pitching in so she gave Todds mom, and my mom a call and they were up for pitching in to help get this gift for him.

What a nice gift it was. Two Tickets to a NASCAR race. This particular race was in Dallas at Texas Motor Speedway. 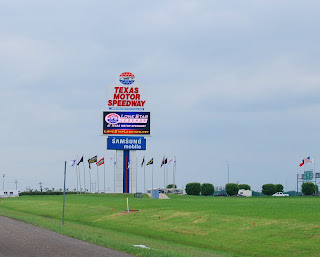 Along with the tickets he also got 2 nights at Dallas Hilton Lincoln Center. What a nice place we had to stay. Um, needless to say Todd did say that this was his best birthday present ever! So we got up early Saturday and went off on a road trip. This was Downtown Dallas as we were getting in. 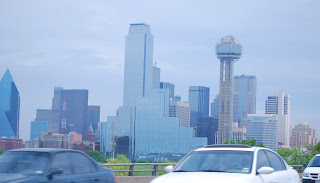 Yea, it was cloudy and a little rainy. And by the way I think something must really be wrong with me. I HATE, did you hear that, HATE interstate driving, and apparantly Interstate riding as well. It made me so nervous being in all of that traffic. I seriously dont know why it makes me so uptight, but man was I glad when we made it to the hotel. It was beautiful and huge. I particularly loved this spot. 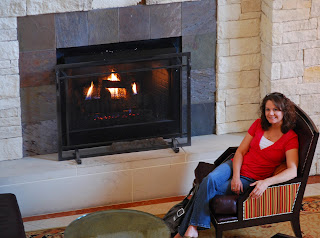 Can you believe it was cool enough for a fire in Texas. I couldnt. Ok so the race was scheduled for Sunday and we got up, got ready, and were off to the races. Um, there was one little thing. RAIN That rain turned out to be a pretty big thing. Believe it or not I left my camera in the car so there are no rain pictures! I do have some on my phone but I am not saavy enough to have figured out how to get them onto my computer. I guess if I would stop long enough to fiddle with it I could probably do that. Anyway after sitting around, standing around and trying to stay dry and warm for like four hours. We finally decided to go back to the hotel and if they decided to race we would turn around and come back. So we packed up and hiked back to the car and left. We turned on the radio and listened to the race commentary or whatever you call it and shortly after we left they announced that the race had been postponed until Monday. So Monday was supposed to be the day we were driving home. But instead we went to the race! 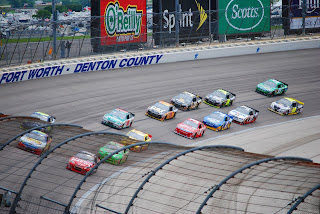 The day was much nicer. It was real cloudy and cool but thankfully no rain! We got to see the race 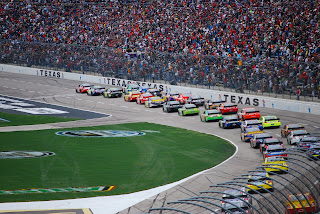 and Todd LOVED it! 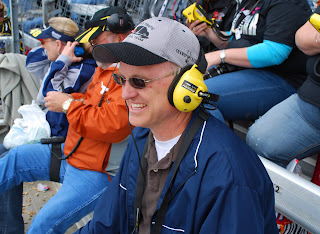 Our guy - Jeff Gordon 24 - was in the lead for most of the race. I was pretty glad that Jeff was going to win while we were there since Todd is a fan of his. But then with, I think 17 laps left, Tony Stewart tipped into the back end of Jeffs car and crashed him out. 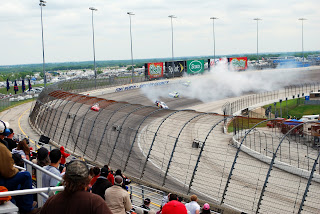 So we were disappointed that Jeff was out of it. But we really had a good time 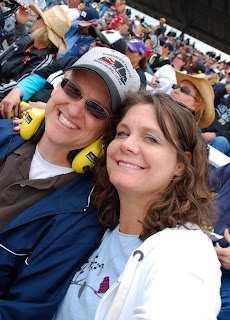 and were so blessed by our family that we were able to have that experience. He loved his birthday gift. 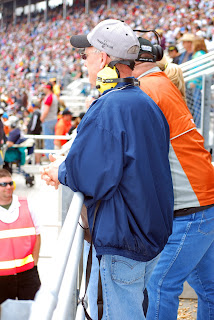 He definitely wants to go back sometime. So you know there are more birthdays, anniversaries, and Christmases ahead! hint hint lol Oh by the way, Todd took several pictures of me and then I realized I needed to tell him to press the button half way down to focus! lol But after I told him that he did a pretty good job! :) 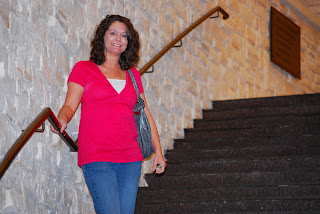 See I told you our hotel was beautiful. Oh and did I mention that it had a shuttle (so you dont have to get out in the traffic!) to the Galleria Mall! With such stores in it as Tiffany & Co., Betsey Johnson, Coach, American Girl, and so many other very expensive stores that were neat to just see since I of course couldnt buy anything from them! hehehe Not to mention the ice skating rink!! What a nice time we had making more memories with each other. :)

That sounds like Larry's kind of vacation. When we went to Disney, we ended up also going to Daytona, but alas no races were going on. :( Maybe, eventually he'll get to go. He might get to go watch the drag races in Monroe or Shreveport one day soon. We'll see.
You were a really good sport for going and for sitting in the rain. lol Glad you and Todd had a good time away~ we don't get couples times nearly enough, do we?

Glad it all turned out okay! :)

Next time, we can all go!

Did you see the zoo pics?

You were in Dallas and we didn't even have dinner?! I'm so sad!

Really though, glad you guys had fun! :)

Marjorie: I did think about it but it was such a short trip and packed full. Maybe next time! :)

What a great gift for a Nascar fan. I feel a little guilty living so close to the Daytona Speedway and not caring at all about it. If you ever want to come this way, you have a place to stay!!!

sounds like an awesome trip! i may have inspiration for my next weekend getaway since i LOVE dallas :)

and i'm with you on the interstate, ours here is nothing compared to dallas but it took me FOREVER to get used to it...and i still hate it :)

So glad it was such fun! I hate interstate driving too! White knuckle thru' all the big cities! And Dallas is a BIG city! Hope y'all get to go again!!