Should have done this already but here goes anyway:

A little while back we got the privilege of keeping Avery for the weekend. It happened to be the weekend of Halloween. Now we have never been big on Halloween at all and no we did not take her trick or treating. Casey did send her little Ladybug costume that someone had given her. She had serious opposition to it and was not about to wear it which was fine with me. But at some point during the evening I showed her the children running down the street all dressed up and after she watched them pass, she turned to me patted herself on her chest and said "MY LADYBUG, MY LADYBUG"! 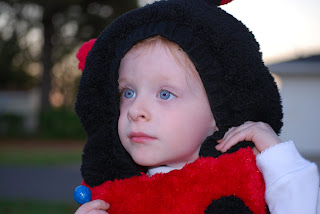 So I did dress her up in her ladybug and and she flew around the house for a while. She had a good time. 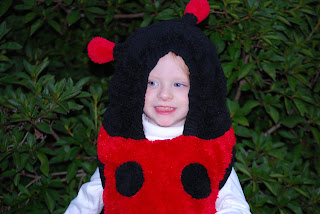 Another thing we did that weekend was put together a new grill as our old one bit the dust. Oh and by "we" I mean Todd and Avery of course. 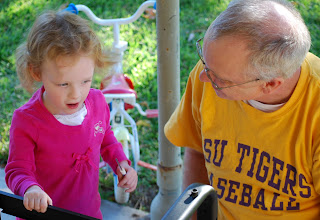 I have never seen her ever seen her so intent or focused on anything ever. That little girl picked up her screwdriver and found every single hole in that grill. While Todd put it together she put her screwdriver in every spot possible. For over an hour she worked at her Poppas side without a break. She loved it. 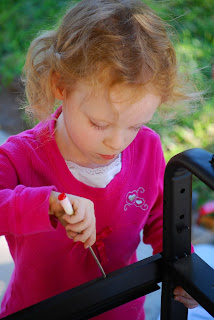 We had fun that weekend. I should have blogged about it already but anyway better late than never right?
Posted by Cristi on Monday, November 22, 2010

The cutest ladybug ever~ Harlee was a bee her first year. :)
I need to post my pictures from that weekend, too. My laptop has a mind of it's own, won't upload but one pic at a time to my blog and I put all my latest pics on it. Now, I've got to reload all my pics onto the desktop and then blog and Facebook them. :( Maybe that's what I should be doing now. lol